At UCF, studios are where you study with your private teacher for lessons and masterclasses on your specific instrument. It is also where music majors form a community with others studying the same instrument in an environment that encourages learning from and performing with each other. All music majors study with our world-renowned UCF faculty members with weekly lessons and studio masterclasses.

Students in the piano studio study directly with faculty member, Yun-Ling Hsu. What sets UCF apart from most other university-level programs is that lessons are taught by faculty and not graduate students. Hsu specializes in teaching injury-preventative technique, health and wellness on piano practicing as well as teaching natural body movements that are efficient and reduce the risk of injury.

Piano studio students have many performance opportunities including performance classes, on and off campus concerts, participation in guest artists master classes, local, regional and national competitions, teachers’ conferences and performance events. Each student’s unique interests, goals and learning styles are taken into consideration to create an individualized plan.

Click here to learn about studying piano in the Jazz Studio.

Piano students will graduate with a solid piano technical foundation and through piano performance, be able to express themselves individually and artistically. They will also know how to evaluate and solve problems on their own and how to think for themselves. Students will also be familiar standard and new classical piano repertoire in solo, collaborative piano and piano ensemble and will be sight-read proficient at the keyboard to be able to learn new piano material quickly.

Hsu works to create a friendly and supportive environment that encourages students to find team spirit among their peers. She is a passionate piano educator who is inspired by her experience growing up in Taiwan to bring cultural diversity to her studio. It is her goal to work across cultures and build bridges in the community through piano. It is important to Hsu that students should have the opportunity to learn regardless of socio-economic, cultural or ethnic background and strives to provide an environment where students will learn to play at a high level while feeling comfortable being themselves.

What our Graduates are Doing

Several B.M. piano alumni have already completed or going to pursuit of master’s and doctoral degrees in prestigious programs such as Universities of Denver, Hartford (Hartt), George Mason, Colorado Boulder, The Catholic University of America and more.

One B.M. piano graduate was named 2017-18 Fulbright Scholar and awarded a scholarship to study a master’s degree in Munich, Germany.

Master of Arts with an emphasis in Piano Performance, Pedagogy and Collaborative Piano 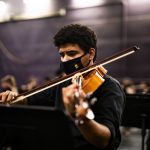 Video: UCF Music charges on and adapts during Covid-19 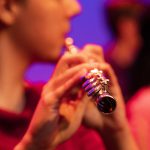 April 16, 2020  11 music students have been awarded scholarships to recognize their academic achievements, musical ability and contributions to the UCF School of Performing Arts. 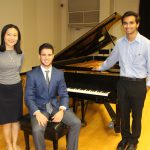